On November 5th 1927 comedy producer Hal Roach released Hats Off! starring the newly paired comedy team of Laurel and Hardy. (It wasn't released in Los Angeles until March 8th 1928). Released by MGM as part of Roach's new distribution deal which promised a wider network of theatres to screen the Roach output and thus a better return. Earlier comedies in the series such as Sailors, Beware! were released by Pathé. The last in the series to be released was Flying Elephants which was filmed in 1927 prior to Hats Off! but released a year later in 1928.

Synopsis
The synopsis for this 2 reel comedy was thus: Laurel and Hardy are door-to-door washing machine salesmen. They climb a huge flight of steps with the washing machine in the hopes of selling it to frequent co-star Anita Garvin. When they approach her she tells them that she only wanted them to mail a letter for her. Annoyed the Boys begin to squabble amongst each other and soon end up on the street throwing each others derbies off. Soon passers-by are drawn into the melee destroying each other's hats and the scene ends when a tractor drives by and crushes their washing machine.

If this sounds familiar it should be, Laurel and Hardy re-filmed Hats Off! 5 years later as The Music Box (with a piano this time!)

The original press sheets survive and offer a fascinating insight into how this film was promoted with images of the original posters and lobby cards. 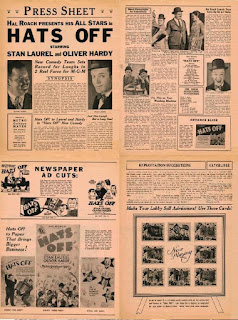 Released on unstable 35mm nitrate film, it was last publicly screened in 1930. By that time the silents were effectively old hat, having been replaced by the talkies. In order to register Hats Off! for copyright protection Hal Roach was obliged to submit 2 prints of it to the Library Of Congress which a letter asking them to ''send back one or both prints''. Both of these prints were unfortunately returned to MGM for general theatrical exhibition and disappeared along with all known prints. Frustratingly not one single frame has been located from Hats Off!.

There have been numerous sightings over the years but none have yielded the long sought after treasure.

There have been several remakes, among them It's Your Move in 1945 starring frequent L&H foil Edgar Kennedy. The Director of It's Your Move was none other than Hal Yates, Director of Hats Off! 18 years previously. What is unusual here is that in 1945 the 35mm negative of Hats Off! was sent by MGM to the Mercury Laboratory in New York for printing, perhaps to assist the production team on It's Your Move? After this Hats Off! was never officially seen again and the negative was presumably not returned to MGM.

Curiously at least 2 film canisters/reels have come to light as follows: 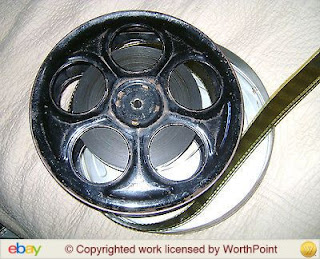 Original ''Hats Off!'' film reel with different film title within. Ebay description: ''Here's an old unidentified silent double-sprocket 35mm film from 1927 or 1928. The can was labeled Hal Roach Comedy , ''Hats Off''

''I once bought an old and empty 35mm film can on the flea market in the Hague. On the lid is a sticker which reads: De dikke en de dunne, EEN KIND KAN DE WASCH DOEN. That means that the can originally contained a copy of Laurel & Hardy's lost film ''Hats Off''

''gave it to a good friend and L&H collector in Amsterdam who has an (almost) complete collection of original L& H film prints. He hopes he can still find the film that was originally in the can but, as it was undoubtedly nitrate film, chances are slim indeed''.

Why is it that that the survival rate of the earlier Pathé films is much greater than the later MGM releases?
The reason is that Pathé were able to secure home distribution rights whereas the MGM output was strictly controlled and no home movie editions of the MGM films were licenced until decades later. That's why once missing titles such as Duck Soup (1926) and Why Girls Love Sailors (1927) were found within the last 30 - 40 years. Note over 75% of all silent films made are currently lost.

Robert Youngson who mined the L&H vault for their silent output for his compilations in the 1950's and 1960's failed to find any material on Hats Off!, it was long gone when he made The Golden Age Of Comedy in 1957. He did manage to locate a print of The Battle Of The Century from 1927 and last year the missing complete reel 2 was located amongst his collection of films used to edit his compilations.

Here is a list of foreign language titles under which Hats Off! was released overseas, courtesy of Peter Mikkelsen.


You can read a fascinating account of the Roach films and their fragile nature by Richard Bann in the link below. 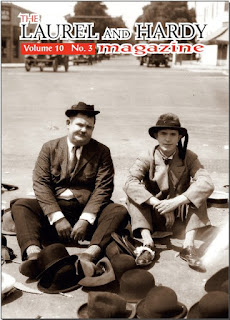 I can thoroughly recommend Randy Skretvedt's revised hardback edition of ''Laurel and Hardy The Magic Behind the Movies'' which details all 106 films plus more in what has to be the greatest book ever written about the Boys. You can order it here directly from the publisher and get the exclusive bonus CD which has excerpt from my interviews with L&H luminaries. Those in the UK might get a postage break by ordering through Amazon, but won't get the CD (or Randy's autograph!)

Also recently published is a very special book complete with a rare audio recoding on CD of the recently rediscovered Laurel and Hardy stage show 'On The Spot' by my good friends Michael Ehret and Nico Cartenstadt. You may order a copy via Kickstarter here. 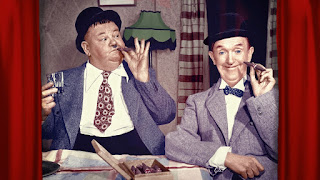 Also available if a wonderful book titled 'Laurel and Hardy On Stage! with CD recoding of The Driver's Licence Sketch by John Tefteller with contributions from Randy Skretvedt and Peter Mikkelsen. This wonderful book and CD is available here. 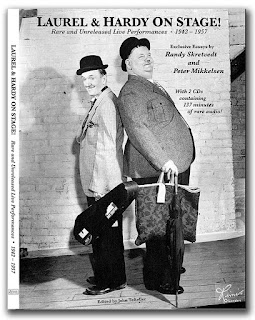 
If you do know where this elusive film is please let us know!

Posted by Ferdinand Finklebery at 13:22 No comments: